Since Game-Master Cris’ game turned out to be so lethal Isis, Jenn, and I had to generate new 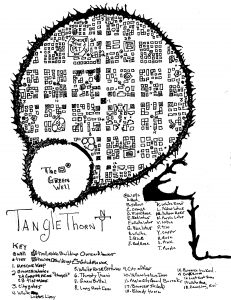 characters. I decided on a ratling male. We were still playing in an “evil” campaign in the Poisonwood city of Tanglethorn. I dubbed my new character the ratling Fourthborn Afheeshh the Nervous.

He is a thorn runner ratling native to the Thorn Ring, a dense wall of thorn-vines that bounds the city. His hair is light brown, matching the thorns, has light blue eyes and what skin is exposed is fair. He is a chaotic evil scrupulous character with Quickling as his class. His weapons are custom versions of Psi’s. They have a thin but sharp blade allowing for a slashing weapon that can stab and hook. Afheeshh’s disposition is hotheaded, quick tempered, emotional but basically nice. His flaws are Shy and Jumpy.

Isis decided on a ratling male Canny-Jack named Wufcor and Jenn a human female Duelist named Pabstcan (exasperated sigh). Both were natives of the wretched city of thorns. The city of Tanglethorn has been under the thumb of one Lord Ebikom for the last two and half years. Rumors that the city lieutenants are planning a coup were circulating. There was tension in the air and the filthy streets were a network of raw nerves, no one wanted yet another violent political upheaval. The two ratlings and the duelist were sitting at a badly stained and damp table in a crowded smoke filled saloon called the Caskroom.

The dregs of the city packed the place along with small groups of the two local beggar-gangs, the Twisted Horns and the Broken Dirks. In addition to them, there were two other local street gangs, the Bronze Boys and the Troll Boys, facing off over an undeclared drinking contest. Wufcor was picking at the table with his dirk in anticipation of a brawl. Pabst was “hanging tough” by the table downing her jack of frothy ale, it had cost her the last coin in her purse. Afeesh (how those round the table pronounced it and it is easier to spell) was watching the two cliques as they grew increasingly hostile to each other.

It took about an hour before both parties stood and walked outside to “handle it”.

Wufcor (played by Isis): “Yeah! I wanna stab someone!”

The three pulled their weapons as they passed between the still swinging saloon-doors following the angry gang members outside into the street.