Game day, the morning the pit-games were to begin. The pit-games functioned as an amateur 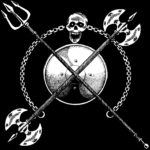 fighter-league apart from the formal and in some respects over regulated official gladiatorial circuit. The fighters matched according to general size and weight with some attention paid to their respective physical prowess and strength. Armor restricted to the arms, legs, and the center of the chest. Other bits legal if both opponents are equipped similarly. Weapons were similarly regulated and rigorously inspected more so than the fighters.

Just before dawn Jíen got his fighter to the arena. It was a large stone building with coliseum seating covered by an awning-like ceiling under which lay the vault-ceilinged galleries. The wounded tended to and fighters vetted and equipped within. Also under the stone step-seats was the entry gallery where vendors sold their wares and bets tendered. The ring was a dirt floor surrounded by a shallow moat meant for the handlers, referees, and judges. On opposite sides of the arena were the gates through which the fighters would enter the ring.

Jíen’s fighter Bludbaer was to face off against one Zurat, a Westlander savage armed with a double-sword. The place was bristling with flags, banners, and ribbons of every color imaginable. The fight doctor cleared Zurat, his face painted with evil blue designs. The doctor moved over to Bludbaer as Zurat jaunted out of sight to await the match behind his assigned gate. The doctor cleared Bludbaer after a cursory glance. Jíen let out a relieved breath.

The Swampers’ Guild was backing Zurat and Jíen couldn’t resist making a gentleman’s bet that his fighter would win. Pit fights continued until one of the competitors couldn’t. They were almost always a death-match. The bookies gave Bludbaer 2-to-1-odds in his favor. Jíen took that bet.

It wasn’t long before Jíen collected 290 gp from the swampers but Bludbaer had taken a fair amount of damage (a whopping 20 Hit Points). Fortunately the wine-blood gambit had proven believable to all onlookers. So much so that White Star healers kept approaching and offering their services for a small charge. So the necromancer quickly shuffled his fighter into a quiet corner of the hospital gallery and repaired the undead thing’s damage the best he could using his Necrology (and spell slots).

The next match and the last of the day for Jíen’s creature would be against a double-axe wielding fighter named Scarnor but the odds were again on Bludbaer’s side. Again, it was a short bout and the necromancer took 2,075 gp in winnings. At the end of a very bloody day the fighters left in competition were Baenox Blood-Axe, Zarcar the faun (Rantcor’s “guy”), Skull-Smasher a half-hill-giant, and Bludbaer. After some of the officials began making off-hand comments that Bludbaer had an uncanny resemblance to another fighter, one who had come in second place last year Jíen took that as a sign to get out of there quick. He was long gone when they remembered the second place fighter’s name, Baercor.

Later at the Troll packed and noisy with fight fans, Jíen fed Bludbaer red wine which several fans were also sending over to the table. It was soon crowded with bottles, tin goblets, and wood cups by the time the necromancer retreated with his fighter back to the tomb.

The next day at midday, Bludbaer was again in the arena facing off with Zarcor the Rockhollow faun armed with a trident and gladius. The odds were 10 to 1 in favor of Zarcor. Jíen bet 2,000 gp on Bludbaer. Emboldened by his observation of the pit doctor, Jíen had cast Invigoration of Unlife into his creation just before leaving the tomb that morning heightening his fighter’s abilities a few notches.

The fight was a desperate one nonetheless. Bludbaer fell quickly and Jíen mentally controlling the undead fighter from the sidelines put his charisma to use. He howled and pulled at his hair and actually got the crowd to begin chanting Bludbaer’s name. That’s when he allowed the creature to rise again to wild cheers from the bloodthirsty throng. Though as a result it’s Negative Aura (the animating force behind the undead and their abilities) diminished (permanent -1).

The second round was brief. Bludbaer chopped down the unbelieving faunic warrior. The arena was erupting with chants of Bludbaer! Jíen’s take on that fight was a respectable 18,000 gp. Only 8,000 of it was given in coinage however, the rest was in a Writ. The matches concluded with Skull-Smash wining his match in quite the messy fashion. The other fighters were either dead or too wounded to continue progressing through the ranks. It would be Bludbaer versus Skull-Smash the next day with 5 to 1 odds in Skull-Smash’s favor. Jíen was hoping for a massive payday as he had a plan forming in his wicked little brain.

Jíen with his bandaged fighter in tow (just to keep the healers away) went straight to the betting tables to make a 10,000 gp wager. A grizzled faun introducing himself as Skull-Smash’s manager approached the young necromancer and the two began a bragging contest which the faun won. After a little more verbal sparring the young necromancer became flustered and ended the conversation with “oh yeah”! He then went on to place the 10,000 gp on Bludbaer to win on the morrow because “that’s how unsure” he was about his own fighter. The young necromancer walked hurriedly away back towards the tavern eager to leave the arena behind when he stopped suddenly in his tracks as a sudden realization smashed into his brain.

Cris (the GM): “Ahahah! That’s right! You were supposed to bet AGAINST yer guy! Nope! You already made the bet! Ah-hahaha!”

Later at the Troll the necromancer again found himself talking to the faunic manager of Skull-Smash. After a few rounds, on the faun of course, they decided to wager a little side bet; 2,000 gp each winner take all. After that Jíen sat back, drank, and ate a little more.

Later in the night, the necromancer saw some Scael Nagas surround a peasant in a dark corner of the tavern as they harassed the poor man with questions about the theft of a certain star metal dagger. He also spotted the mark of the Shakai tattooed on their arms. After they dealt with the peasant he approached the one that appeared to be the leader and was paid 150 gp in exchange for some information about Rantcor and the Broken String. The necromancer was disappointed as he thought that the information provided was worth more but he shrugged and left the Troll with Bludbaer following.

Instead of retreating to his familiar old tomb this night though, Jíen decided to crash at the haunted villa instead for safety’s sake. He simply had the resident wraiths open the locked gates to him. During the night before going to sleep the necromancer had a conversation of sorts with the “boss” wraith. At least as much, a conversation a mindless undead creature can provide. Wraiths only retain a few negative emotions and the thoughts tied to what they used to be both of which replay like broken records in random combinations.

They do harbor some of the knowledge and secrets they knew in life though that can be brought out through careful and clever manipulation granted the thing isn’t trying to kill its interrogator. The withered-horror revealed to the necromancer a long undisturbed cubbyhole, unfortunately empty, in the bedroom wall. So Jíen used it to stash a small horde of 8,520 gp.