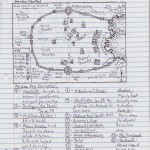 Straight from the GM’s Notebook

Vorwulf chopped Dead-Eye down for the second time only to have him reassemble his rotten and now badly splintered bones before he could hit the ground. Magiia power attacked Bers with her own axe but the blow was easily parried. Grom activated the Heal All ability on his helmet and restored Magiia to full health at the same time flooding the undead Bers with positive energy causing her dead flesh to suddenly rot and to ooze off of her bones. Bers swung with a powerful blow at Magiia but missed nearly throwing her sword but splattering the shaman and the Feren amazon with foul smelling slime and bits of gelatinous flesh. Vorwulf continued the duel with his former master in the alley exchanging blows one for one and taking some extra damage from the crackling purplish static that surrounded its body as he struck. Magiia landed a massive blow into the dripping corpse of her predecessor finally dropping the thing. Grom readied for the corpse to suddenly jump back up, it didn’t so Magiia began to loot the body.

GM (me): “Ya’know the armor’s gonna be foul with the juice from the corpse.”

Cris: “Aw who cares! You could just wash it off! I wouldn’t let go of a superior quality magic silver chainmail!”

Vor finally dropped the creature that had been his master the shadow-flesh all chopped away and the bones splintered. After taking the time for a breath he put Dead-Eye’s remains (with gear) into a gunny-sack. When he emerged from the alley he found that he had been left behind. The shaman had run to the west gate with Magiia following almost immediately behind following as soon as she had stowed the goopy armor and weapons looted from Bers’ corpse in her pack. She found the helmet that Bers had been wearing to be acceptable enough to don and did so while chasing after him and was now wielding the star metal shield. Vorwulf used his silver scimitar slashing the air its Dimension Door ability allowing him to step directly from the alley to the palisade above the West Gate through the dimensional gash.

The shaman and the Ferenoi ran into the runner that had been assigned to the West Gate, he was slick with sweat, his wet hair steaming. Gasping he saw and recognized them, “Oh there you are.” He huffed in relief and relayed that the other runners had been alerted to the enemy being at this gate and he took up his position near the buildings ready for orders but until then he leaned there catching his breath.

Vor was standing on the walk behind the wooden battlements over the west gate between the two timber watch towers that stood on either side of the still patchwork gate. He activated the Eyes and Ears of the Dragon ability on his magic coif as he gazed over the battlements readying his bow. He was already letting loose as Magiia and the shaman climbed the ladders to join him, the tinkling of glass which sounded as if in time with a rapid march, or charge drifted over the palisades. The first of the bottle stuffed skeletons charging the gate exploded as soon as the pair of dragon-slayers could see them. They could see there were 10 skeletons with several bottles of varying alchemical substances tied to the insides of each of their ribcages charging towards the gate. The first that Vorwulf had shot had exploded with a blinding flash splattering fire and acid in a wide radius about it setting off four others. It was easy to tell that each of those skellys packed enough punch to blow the gate sky high if even one made it to the gate. As the alchemical flames burnt out in the snow they could also see what the troops guarding the gate had been engaging were a troop of about 50 animated corpses bearing axes, hammers and shovels (nothing but workers) aimlessly meandering about occasionally striking blindly at the wooden palisades. Magiia pulled her shortbow and shot but missed as the skeletons flew towards the gate through the snow. Grom tried to cast Call Lightning but failed the magic getting away from him and causing the clouds above, through which they could still see the hideous black moon like a hole in the sky, to erupt with lightning. Vorwulf shot again nailing a single skeleton near enough the gate to rattle the battlements when it blew. Magiia shot and missed again then Grom finally got his spell off properly and blasted the last four away which were as close as the previous had been the flash lighting up the battlements as bright as day but only for an instant. They surveyed the battlefield steaming craters marked where the bomber-skeletons had been and the animated corpses which were meandering about the palisades were studded with javelins and arrows to little effect but they could see something coming in from Sirti Road. It was a group of 10 of what appeared to be zombie Arboreans marching towards the gate. Vorwulf and Magiia spotted a bright green flash in the distance behind the enemy lines beneath the war banners of Blackbrow and the mercs of Poisonwood. They both caught the flash that came an instant after behind them as did the bowmen on the palisade whom turned and began shouting.

Vorwulf: “Archers! Archers!” He pointed at the group of creatures that had just teleported in on their side of the palisade near the gate. He then changed his mind and told them to fire on the Arboreans marching towards the gate and shouted to the guardsmen to get their spears on the enemies that had just appeared on their side of the battlements. He downed a healing potion. The runner had already torn off through the snow towards the beerhall to alert the Achaánal Clan warriors that the enemy had breached the palisades.

The enemy strike force was below them where they had magically appeared in the snow not too far from the inside of the gate. The strike force consisted of two skeletons wielding superior quality longswords wearing bronze scale-mail and bearing bronze shields and two unarmed (relatively speaking) undead Arboreans all four of these being led by a slightly larger skeleton with bones grafted over it forming into a sort of grim plate-mail. This fiendish commander was wielding a jagged bladed sword seemingly carved (or sculpted) from polished bone. Grom used his magic ring which had a single use Heal All spell on it that he had bought in Chago from a brownie (a minor detail omitted from that entry; whoops) in an attempt to fortify his allies and wound the enemy. The illusion that was on the ring that had made it appear as if it were a ring of Heal All disappeared; it turned out to be just a twist of rusted wire. It was then Magiia let loose a blood-curdling Amazonian battle-cry and leapt from the palisades with a power attack her sword crashing into the leader of the undead strike force smashing him to bits. The two sword bearing skeletons slashed at the Ferenoi wounding her slightly and then the pile of plate-like bones reassembled themselves. One of the zombie Arboreans moved to the gate and prepared to begin bashing at it with its clubbing dead-wood fists the other slammed its fists into Magiia’s unarmored body. Vorwulf turned his bow to the Arborean at the gate wasting two of his Ice-Steel Frost-Burst Magic Arrows which missed their target disappearing into the snow drifts on either side of it with muted blue flashes. Grom summoned 2 inferior earth elementals which erupted from beneath the snow as semi-humanoid piles of dirt which grappled the Arborean at the gates. Magiia endured blows from the skeletons and the other Arborean. The leader struck at her with its bone sword which glowed a deep purple as it struck passing through her chain mail slicing into her flesh completely bypassing the armor and that was when her chain mail shirt suddenly rusted and disintegrated off of her body leaving her completely naked. The shaman blasted the Arborean attacking Magiia with flames and held them on the creature hoping to set its dry, dead-wood body aflame.

Magiia disarmed one of the sword wielding skeletons. Vorwulf concentrated his sights on the Arborean by the gate which was able to break free and smash a small hole into the gate before being grappled again. Grom used his healing touch on Vorwulf. The Bone-Lord, leader of the undead strike force, slashed repeatedly at Magiia whom parried desperately. Grom summoned two more inferior earth elementals and sent them at one of the sword-wielding skeletons. They easily grappled it. Vor thumped his arrows into the Arborean by the gate finally doing enough damage to drop it. Magiia smashed through one skeleton reducing it to flinders then into the other which collapsed into a pile in the snow. The Bone-Lord hit Magiia his evil blade cutting deep forcing her to make a recovery check to stay standing and conscious. Magiia didn’t know that the helmet that she was wearing had the Shield ability on it.

Cris: “No ya wouldn’t. None of us had chance to tell ya yet.”

There was Magiia facing the Bone-Lord and the lone Dead-Wood Arborean the true status of the other undead creatures unknown. She was badly wounded, dripping with sweat and blood, steaming in the snow.

Jenn: “I charged in without thinking didn’t I?”

Then the lights in the dining room went out.

The power had been knocked out for the entire neighborhood suddenly leaving us in the dark and stranding Cris’, Gil’s and Jenn’s characters in the midst of battle. It was raining. Jenn went into the living room and looked through the curtains. She said she could see lightning in the distance. All of us sat around talking, waiting for the power to come back up and when it didn’t Jenn lit some candles and we continued the game by candlelight.