Jesae the bard (played by Rhiea) awoke in a haze and realized after a few moments that he was in a southern nomad caravan with a naked Stranis next to him sans most of his stuff (Rhiea lost her character’s inventory list). He only had the Ring of Invisibility, a few coins and his lute still on his person. He quietly vacated the wagon before Stranis could wake up and high tailed it back towards the tavern. He stumbled through the gates as the gypsy camp was located outside of the city ramparts. As he reached the neighborhood of the Hopping Rat Tavern he was surrounded in the muddy street by four well-armed thugs all with a black ‘X’ tattooed on their throats. They demanded everything on him commenting on his ring. He attempted to talk his way out of it but as he realized that they had no intention of just letting him go he activated the ring and escaped while the mooks were still reeling with surprise shortly reaching the tavern.

Jesae rejoined the group while they were preparing to move out towards Hirok to reclaim their treasure trolls be damned. While he waited the bard pined after his lady love and began to compose songs to her. Bers after a little while realized the bard might be under magical influences (he was, see last entry) as the situation was comparable to that of Dead-Eye when he was affected by the snow-maiden’s power (see The Dragonslayers Pt.18). Grom, the shaman, used Mystic Diagnosis to confirm it and the group searched their potion stores and came up with nothing that could lift the spell.

After a while Vorwulf the ranger/dragonslayer decided to check to see if the coast was clear before they exited the tavern and spotted a familiar ratling spying on them atop a nearby roof. The creature ducked out of sight immediately as it realized it had been spotted. Vorwulf also could see, easily, that there were at least four Crossed-Staffs thugs waiting in the alleys across the street probably in ambush.

Vorwulf: “Tell Bloodspear we’re ready when he is!” The thugs immediately started mustering in the street.

After several minutes 8 thugs led by Arvor Bloodspear were in the street ready to fight. Four of them were wearing leather scale armor with a warbelt and bronze bracers. The other four had on leather lamellar and had yellow actons over that with steel bracers on their forearms. All but Arvor Bloodspear were armed with iron-staffs. Arvor was armed with a fighting spear and was wearing a wooden chestplate under his yellow acton with steel bracers on his wrists. All had most of their faces hidden under yellow bandannas.

Gil (Grom’s player): “Man. Why do all these weak guys gotta fight us all the time.”

Vorwulf drew his paired cutlasses and charged Bloodspear himself. The fight was lively with the shaman hitting a few of the thugs with lightning, two of the wounded pole-fighters finally being killed by the cone of force emitted by Kyr’s magic armor when its hit, a thug being burned to death by Grom’s throwing fire at him, and Vorwulf and Kyr getting tripped in battle. Only Bloodspear and 1 other thug survived into the second round both being basically chopped in half by Bers. Jesae even got a shot in at Arvor with a Forceball emitted from his magic bow, the one with a large emerald in it, given to him from the group’s armory. The battle ended and ended on a high note as none of the adventurers were remotely injured. They looted the bodies, or the remnants thereof and collected a few platinum pieces, gold bits (pieces of a gold coin often worth an eighth of gold coin each) and a lot of fliks (zinc coins minted by Fertums in order to keep economic control over the local area, often only good at the Fertum that minted them). Kyr and Jesae split the platinum pieces. The fliks and gold bits went into the empty strongbox behind the bar. Vorwulf smoothed things over with the angry shop owners whose buildings were damaged in the fight paying them off with 1 platinum piece each. After Vorwulf hung Bloodspear’s fighting spear on the oven the adventurers whipped out their map of Hirok-Nor and began planning out the route for the excursion in earnest. Jesae went back to talk to Stranis while they did this and while in her presence he wound up giving her all of the coins he had just gained. Strinis’ parting words to him were, “now go make some more money for our family.”

By noon they were heading out on horses sans servants or protégés who were left behind to watch the tavern and wagons. Just before they trotted through the gates Canohk the bard ran up to them hailing them to stop. He avoided eye contact with Bers and was brushed off by Vorwulf who said that they already hired a bard. Dejected Canohk frowned at Jesae who made faces at him as they exited the city gates.

By early evening the group had made it a few miles into the forest and was preparing to find a campsite until Vorwulf sighted a full unit of Hill-Landers patrolling the woods. He realized that they almost ran headlong into the mercenaries as the company of warriors was only 30 ft. away mostly hidden by the trunks of trees. The mercenary unit bore the standard which the slayers had seen before, a split field of blue and red with a spiked club over a cracked yellow skull. It consisted of 5 human warriors showing traces of faunic blood, 5 faunic warriors, a single Hill-Giant being led by a commander baring the traces of both a faunic and Hill-Giant heritage. The fight was very brief only lasting a single round and ending before all of the mercs even got their first turns. Almost all of them including the giant were transformed into chickens by Grom, a single unfortunate human warrior was cut down by Bers splattering Kyr with blood and gore and the remaining 5 fauns ran away into the woods heading east, the same direction in which the adventurers were traveling. Grom collected 3 of the chickens intending to make dinner of them.

They looted the lone corpse and went through the gear that the victims of Grom’s magic had left behind. A little while later they had settled down in a well-hidden campsite which Vorwulf had searched out and took turns at watch. The night was uneventful on two of the three watches but on the second watch, Kyr’s watch, she caught sight of a man-sized raven flying overhead through the trees. She thought she could hear a faint screaming as it passed then a silk slipper dropped from above to the ground. She woke the group and climbed a tree sighting that the over-sized raven had flown in the direction of a tower from which she could see lights in the distance almost directly north of them. Vorwulf and Grom figured it was Ekit’s Watch where there was a wizard which they had dealt with once before. They shrugged their shoulders and went back to sleep.

The next day at late morning the group while nearing the southernmost slopes of Hirok sighted 12 ft. tall trolls in full plate armor waiting behind a copse of trees possibly in ambush about 50 ft away through the trees. All of the trolls had great helms on their heads and were bearing giant-sized serpentine bladed great swords. Kyr dismounted in preparation to fight and the lead troll charged rushing through splintering trees directly at the still mounted Jesae. The troll struck him with a natural 20 slashing the little bard and his mount in two.

Vorwulf dismounted and Bers deactivated her Ring of Phantom Mount, the phantasmal horse under her disappearing landing her on her feet. Grom called down lightning onto 3 of the trolls dealing some damage. A second troll charged the shaman who parried its powerful blow getting locked into a clinch his magic steel buckler versus its crooked blade. A third troll charged Bers and struck her with a massive blow of natural 20 she dropped almost dead (by 1 pt.) to the ground bleeding everywhere.

Grom let go of his buckler which was thrown away by the troll’s blade and he used a magic ability on his mithral helm to cast Heal on Bers healing her wounds (save for 5 Hit Points). Vorwulf got struck with a critical blow and was hideously wounded but was able to active his Boots of Fleet of Foot.

Kyr was forced into a recovery check to reduce the damage and the shaman quickened a healing spell to help her. The shaman when parrying another sword blow used his battle magic (a magic feat) to try to transform the trolls into chickens but the monsters’ armor began to glow seemingly protecting them completely from the spell. The rest of the round was spent avoiding blows or taking a fair amount of damage while Vorwulf danced around the trolls unleashing a rain of paired weapons blows and power attacks dropping two of the trolls. The second round began with Kyr striking out with a power attack facing off with one of the trolls in single combat. The shaman cast Mass Bull’s Strength reinforcing all of the adventurers and by the end of the first turn Bers leapt back to her feet. Kyr went into a berserker rage and Bers dropped 1 of the remaining trolls. The last which Kyr was engaged with in battle was killed by Vorwulf which had to flee with a blindly raging Kyrahma on his heels. Fortunately the duration of Kyr’s rage expired at the exact same time as the duration of Vorwulf’s boots.

The remains of the trolls were scattered about and the armor unrecoverable as it had been torn to scrap when hacked-open by the adventurers on the deathblows when the sun turned the flesh of the trolls into stone. The group of dragon-slayers surveyed the scene and gathered up the remains of the bard and his gear and buried him near a tree on which they carved his epitaph.

Vorwulf: “We’re gonna have to deliver the bad news to our bar-wench when we get back.” 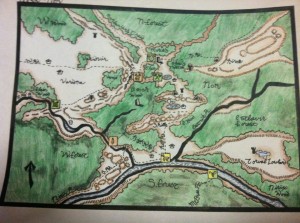 Map of Hirok-Nor the slayers purchased a while ago.