The End of the Second Dragon-Slayers Campaign (played between January and July 2014).

The battle was over and the field was aflame, the moans of the dying barely audible over the roaring fires. The slayers had begun to fall back with the Westlander forces that were dragging what companions they could grab with them. Vorwulf glanced over the field as he and Bers retreated. He caught sight of a pair of wounded and barely moving lumberjacks through the flames their gory broadaxes next to them. He ran over to see what he could do. The first he came upon was lying on his back grasping a severe stomach wound. Vorwulf recognized him as Forgax the bad-tempered foreman of the woodcutters. He went to grab the elder man by the shoulders.

Forgax (begging Vorwulf and motioning to the other woodsman): “Wait. Wait. Check on poor Arik.”

Vorwulf went to the other man who was considerably younger and lying face down. He confirmed the younger was dead and when he turned to take Forgax up, he was dead as well.

Back at the far south end of the delta Bers and Vorwulf met beck up with each other at Lord Vorahd’s pavilion. They saw the shaman assisting the healers with the wounded while at the same time trying to cook a stew under the nose of the camp cook. The pair left eh shaman to his work. When they turned they saw Lord Vorahd being drug on a litter into his tent with a gaping belly wound and rent armor.

Cris (Vorwulf’s Player): “S#*t. I’ll give him one of my healing potions. Does that help?”

The potion helped somewhat but seemed a bit ineffective though it stopped the bleeding. Lord Vorahd immediately gave the pair orders to scout out the lair and authority to take along a few men. Vorahd wanted to make sure they would not be ambushed while they were still so vulnerable. The pair of slayers decided to forego snatching up any “peons” and decided to double time it to Old Sawback’s Lair and from there try to prowl inside. They decided to eat some of the shaman’s soup before setting out on the mission. Grom had made the soup from the frogs he found on the battlefield, the ones that used to be trolls.

After about an hour’s travel they made it under cover of darkness to the mouth of the lair to where Vorwulf had tracked the retreating trolls, the trickling of the creek water which flowed from the cave being the only sound. The bright orange of the flames of the battlefield loomed angrily behind them past the night-black pines.  Both the slayers could see the giant troll commandant trying to stay hidden just inside of the cave entrance probably prepared for a surprise attack as soon as the slayers attempted to enter. Bers used her magic boots to kick a boulder at the giant troll but missed.

3 large trolls armed with two-handed hammers and wearing scale mail armor, wolf-skin mantles on their backs, and steel caps on their heads. Vorwulf dropped his bow and pulled out his heavy great axe and Bers repeatedly swung power attack after power attack with her axe. It took only 2 rounds to bring down all 4 trolls. After they were all down Vorwulf emptied a jug of acid he had purchased for such an occasion over the twitching and fast regenerating corpses.

After their easy victory over the last troll unit that had taken the field they were trying to remember where the treasure chamber to the lair was and how to get there as the lair was by no means small, it was a twisty complex of caves with a subterranean river running through it. After a short while they just decided to use Bers’ Cape of Bat-Flight, as it was still night, to fly to the top of Hirok where they knew the opening to the central shaft of the lair was located. They had hoisted the 3 massive treasure-laden chests through it before burying them under the shadows of the broken towers; ruins at the far end of Hirok. This took them about an hour to maneuver up to the shaft at the top of the hill. Once inside, however, they easily maneuvered their way to the entrance of the inner lair, a passageway lit with hundreds of oil lamps set into the niches in the smoothed rock walls. They landed on the cliff’s edge which dropped to the dark subterranean river below. At the end of the massive vaulted passage where a pair of equally titanic polished gold doors bearing the image of a ridge-back dragon behind which was the treasure chamber. However four 10 ft tall suits of animated armor bearing the twisted faces of roaring trolls stood in a line before the doors, from behind them the pair could hear chanting.

The slayers turned invisible using their cloaks of Invisible to Sight and tried to sneak past the orange-steel constructs. As soon as they got within 100 ft of the orange-armor the constructs began to advance on them. The constructs were armed with shields and spiked maces made of the same strange metal as themselves. The pair rushed to meet the lumbering things with Vorwulf peppering one of them with his nega-steel arrows then switching to his great axe when he finally closed. Bers rushed in swinging wildly and in the second round dropped it to slip on her Gauntlet of Transmutation in an effort to reduce one of the constructs to a puddle of slime, but it made its save easily against the gauntlet’s magic. Vor became surrounded by three of the four while Bers bashed away at the one dueling with her in the third round. The tide turned when Bers shattered the one she was fighting and ran to assist Vor who was taking it from all sides but steadily wearing down two of his metallic foes. By the end of the battle which lasted for 5 rounds Vor was somewhat worse for the wear but Bers was only slightly scratched. After guzzling some healing potions they noticed that one of the great double-doors was slightly ajar. They peaked inside.

They saw a pile of gold and other riches disappear with a flash at the center of a circle of roughly hewn gemstones while a nearby half-troll mage chanted in front of an open tome. 3 latter-generation trolls each bearing a large chest (an Orange-Red Metal Chest, a Mother of Pearl Chest and a Titanium Chest with Quartz Hardware; the slayers’ buried treasure) were approaching the circle. Looking on the proceedings were 2 young brownfang dragons, 2 very tough looking brown-skinned dragonsauri and a giant creature which looked like a cross between a brownfang dragon and a troll with a large tome dangling form a chain around its neck.

Cris (Vorwulf’s Player): “Aw man! We can’t take all those guys on! We’re wounded on top of it!”

Jen (Bers’ Player): “Maybe I should just use the mallet!”

They waffled a bit finally deciding on using the Mallet of Mass Harm to even the odds possibly netting an easy victory reducing its remaining charges to 1. Bers struck it on the ground and the latter-generation trolls, the half-troll mage and the pair of young brownfangs shrieked and fell dead onto the floor. Bers activated the shield ability on her helm and charged through the gap in the doors and came face to face with a dragonsaurus it snapped at her but missed. She swung at it with her axe wounding it.

The big creature, the so-named God-King of Trollguard, ran at her and stomped on her dissipating the shield spell on her. The second dragonsaurus charged her and snatched her in its jaws, she had rolled a natural 1, and then proceeded to rend her whipping its head and her side to side savagely. Vor, still just outside of the doors, activated his Boots of Fleet of Foot. When Vorwulf charged in Bers retreated to drink down a Potion of Heal as she was very badly wounded saved only by a successful luck roll from instant death. Bers rejoined the fight and the pair battled it out with the pair of dragonsauri and the God-King next to the double-doors. By the end of the first round they had taken out one of the dragonsaurs and leaving the other badly wounded and dying. Vorwulf, using his extra attacks granted by the Fleet of Foot ability, drank down a Potion of Might essentially turning himself into a superhero.

The second round saw Vor a whirlwind of activity delivering power-attack after power-attack and Bers downing two more potions in order to stay in the game while the God-King of Trollguard kept trying to stomp them into jelly forcing them to dodge repeatedly. Bers dropped the second dragonsaurus. The third round of battle began with the God-King missing with a power-claw strike at Bers and her retaliating with a power-chop with her axe and Vorwulf following with a slash of his paired cutlasses. The God-King then made a stomp at Vorwulf who rolled a Natural 1 to dodge the monster’s giant foot.

Fortunately a luck roll saved him, barely though he took enough damage to be very near death. Bers took down the monster with a power-attack dealing just enough damage to drop it. They doused its corpse in the remaining acid they carried with them and collapsed giddy from exhaustion and loss of blood against their treasure chests. 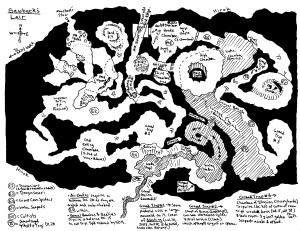